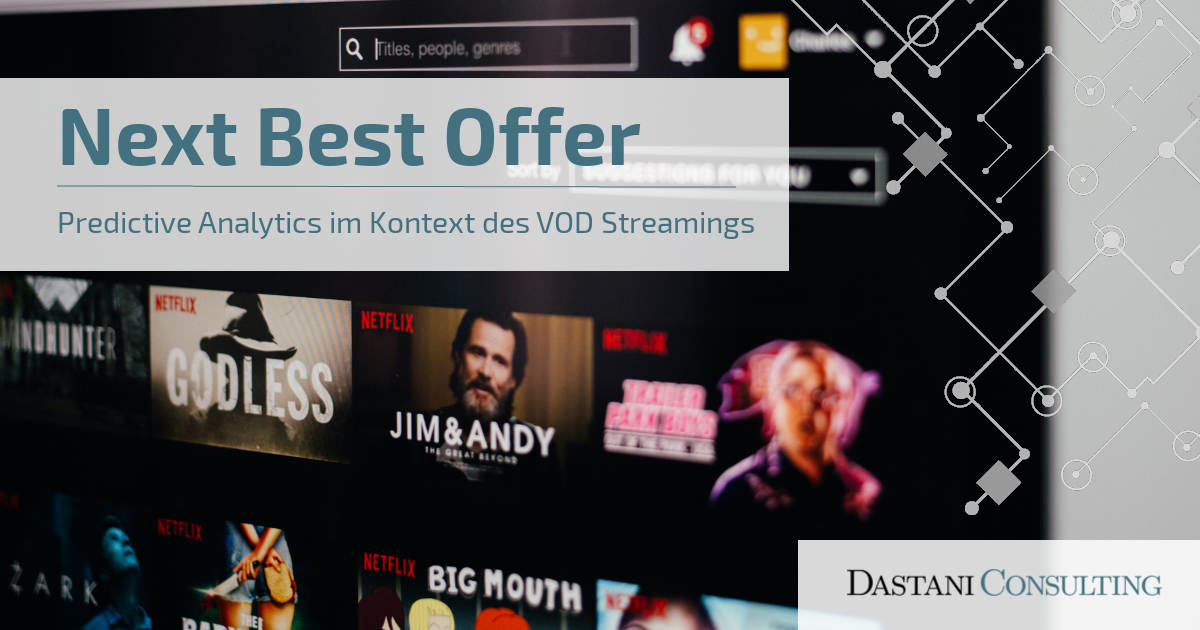 Providers of video streaming are keen to tailor their customer proposition in a more targeted way and also to attract new customers. Instead of offering a random variety of series or films, they use Big Data to analyse what really appeals to their customers. Netflix used Predictive Analytics to make investment decisions that eventually made it one of the largest video-on-demand providers.

Video On Demand (VOD) providers such as Netflix, Amazon or Sky possess a huge pool of user data that enables them to generate new, customised recommendations for their users. In the case of Netflix, this goes so far that even the title screen of a movie displayed in the menu can vary depending on a customer’s preferences.

Rather than being a product of chance, the decision as to which film or series licence a VOD provider would like to purchase next, or which in-house production should be initiated, results from Big Data analysis. Following an in-depth analysis of its customers’ interests, Netflix decidedto commence production of the House of Cards series in early 2013 – an extremely costly undertaking due to the cast of prominent actors. Commercially, the series became a huge success; in the first quarter of 2013 alone, the series is said to have generated three million additional subscriptions for Netflix worldwide. The decision was made using Predictive Analytics methodology that foresaw a high success potential for the serial format.

From the non-specific to the individually adapted offer
Historically, the development of VOD providers can be traced in four steps. From the end of the 1990s to the beginning of the 2000s, providers sought to secure licences that allowed them to offer promising films and series on their platforms. Competition consisted primarily of being the first provider to have the latest and most popular films on offer. But it was the proliferation of high-speed internet that finally paved the way technically for the second step in which video streaming became a high-quality mass market. In a third step, VOD service providers began producing their own productions. Nowadays, all VOD providers have a wide assortment of their own series and sometimes also films on offer, which distinguishes them from their competitors. The use of Big Data can now be considered as the fourth step that will shake up the industry once again – so non-specific video offers for everyone have advanced to offers that are individually tailored to the customer.

VOD providers are able to capture the users’ exact clickstreams, meaning their individual step sequences on the portals. This enables them to understand, among other things, how long individual customers watch a video, if and when they break off, which items they change to, which titles and in which genre they search, or how often they watch specific videos. In addition, providers gather information about users’ average video ratings and which hardware they use.

Moreover, linking clickstreams with other social media data gives insight into customer demographics. Based on customer profiles gained in this way, forecasts can be developed as to which offers VOD customers will be most attracted to. The times when the newest films in a portfolio were the most popular are coming to an end. This can lead to cost savings, as providers can downgrade to promising cheaper licences and in-house productions, so that they are better able to search for titles that offer them the best value for money.

Next Best Offer as a driving force
In contrast to a generic offer, a personalised customer approach offers a tremendous opportunity to bind customers to one’s own offer in the long term and to maintain their continued interest in additional content. Analysis models were still in their infancy when the Netflix 2006 streaming service announced “Netflix Prize” to increase the accuracy of their customer analysis. The model was able to increase the level of accuracy by 10%, however permanent implementation was abandoned at that time due to the high cost.

This website uses cookies to improve your experience while you navigate through the website. Out of these, the cookies that are categorized as necessary are stored on your browser as they are essential for the working of basic functionalities of the website. We also use third-party cookies that help us analyze and understand how you use this website. These cookies will be stored in your browser only with your consent. You also have the option to opt-out of these cookies. But opting out of some of these cookies may affect your browsing experience.
Necessary Always Enabled